Alexander Skarsgard is John Clayton III, aka Tarzan. Actually, Alexander Skarsgard is Tarzan, aka John Clayton III. He fled his primal life in the jungle to reside in a London mansion with his wife, Jane (Margot Robbie). He is doing his best to live a normal, human existence. But the Congolese people are under threat of slavery, and King Leopold II of Belgium has sent his trusted, villainous deputy Leon Rom (Christoph Waltz) to extract diamonds which will pay off Belgium’s debts. Meanwhile, an old enemy has a bounty on Tarzan’s head – if Rom brings him to the vengeful tribe leader, Rom gets a handful of diamonds. Can Tarzan escape being captured, rescue the native population, peacefully reunite with the animals, as well as save Jane?

The opening of this huge budget movie promises quite a potentially interesting plot, with sweeping, visually beautiful establishing shots of the Congo, and subtext to outline the conflict at play. David Yates uses his signature dark, washed out grade which denotes that something serious is going on – a technique that even rendered the later Harry Potter films as quite sinister. But the rest of the movie just does not quite live up to that promise. The age-old story of the man who was raised by gorillas and who can swing through the thick, African jungle with style and grace, doesn’t seem to gel with the paramount topic of slavery and diamond trade.

Having said that, it as really exciting to watch the sequences of Tarzan swinging through the trees. I saw this movie at the cinema, so it was a pretty great experience when the fast-paced visuals and impressive CGI all worked together. Every now and then, the story cut back to when Tarzan first met Jane, which were engaging moments because we get a deeper look into the characters and their relationship. It is interesting to watch a sophisticated lady in a dress have her first encounter with an apeman who has never seen a white, upper class woman before. I also enjoyed some devices that were reminiscent of the Disney version we all know; Djimon Hounsou plays the tribe leader who wants revenge on Tarzan for killing his son in a jungle brawl decades ago, and he wears a leopard skin suit (not the ‘fabulous’ kind) – a nod towards Sabor, the blood-thirsty leopard of the Disney film.

The thespians?
Margot Robbie brings a strong, biting side to the character of Jane, and every emotion she displays is palpable. Christoph Waltz returns with what he does best – being one hell of an evil baddie. I think he did what he could with the character and certainly doesn’t do a bad job (same with Samuel L Jackson’s role in this), but the one to write home about would be Robbie – can’t wait to see more of her! Alexander Skarsgard has got the animalistic mannerisms down to a tee. And man, that guy’s in good shape.

Lastly
This is not a poor movie, it’s an enjoyable ride. But it gets lost somewhere in between being ‘one for the kids’ and a serious, socio-political depiction of significant world issues. 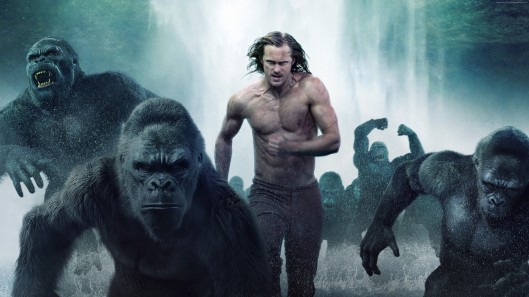