Gory and gruesome deaths on the big screen are not for everyone. Some people simply love it, and some find it hard to watch. Here’s some of the most horrible deaths in the movies. 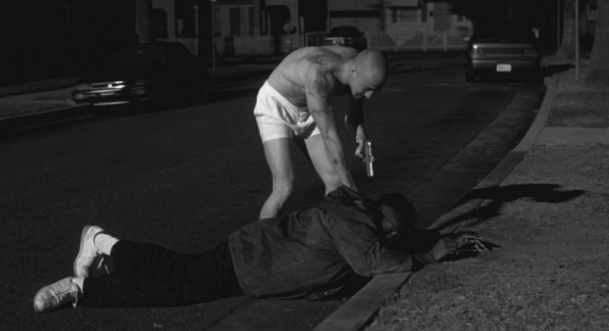 The curb stomp – American History X (1998)
This gritty crime drama is an absolute classic, and remains as one of Edward Norton’s most memorable performances to date. The first time I saw this movie, I could not refrain from looking away when Derek decides to execute a guy by getting him to place his open mouth over a curb and… well, stamp on his head. Ghastly!

Horrifying shower surprise – Psycho (1960)
Marion Crane meets her untimely end in one of the greatest horror thriller movies of all time. After seeing Psycho, I was extremely scared of looking up at the shower head whilst the water would be running. A very real fear triggered by those clever Hitchcock suspense shots.

Chucked off the boat – Funny Games (1997)
This is an interesting take on the horror genre. Director Michael Haneke also went on to remake the movie shot by shot in 2007, only this time set in the US. Both movies are laced with all kinds of terrifyingly sinister scenes, and the final moment of this one particular character is simply awful!

Death by Black Mamba – Kill Bill: Volume 2 (2004)
Bill’s brother, Budd, suffers a tragic death after being bitten several times by the deadly Black Mamba snake. As he is writhing in agony in his last, harrowing minutes, Elle is courteous enough to read out the facts and figures about Black Mamba fatalities.

Impaled by pole – Cannibal Holocaust (1980)
Director Ruggero Deodato caused great uproar with his controversial movie Cannibal Holocaust. The graphic violence and obscenity of the film displeased quite a lot of people, and debates arose about his portrayal of brutality towards animals and even humans on camera – were people harmed, or even killed, in real life?! Audiences wondered. The scene where the tribal woman is impaled straight through her body is pretty shocking, to any hardened horror veteran.

What’s the worst death in the movies, in your opinion?

Fatal Attraction meets Reprise Joan Castleman is the quiet and supportive wife, who accompanies her husband, Joe, to Sweden upon …

Somewhere around the age of five or six, we realise that animals can’t talk like we do. It is such …

My Scientology Movie meets James Bond Ethan Hunt is back, with a mission he chooses to accept. Laced with traps and tribulations, …

Nothing is as satisfying as a despicable baddie on the big screen. It causes us to question our own morals …

Not really in hiding. BUT I’M STILL HERE. I’m alive! Wait… did anyone notice I was gone? It’s been a …

Hello! It’s been a little while since I last posted, I’ve been slack recently due to a multitude of factors. …

A kiss in the rain is a pretty intense moment because it’s dramatic. It’s wet. It’s stormy. It’s epic. It’s …

With platforms like Netflix taking the world by storm, we’re getting exposure to more and more documentary films. This kind …

Joaquin Phoenix – an actor that I’ve really enjoyed in all the movies I’ve seen him in. A dedicated intensity is …